This was my first ever mountain summit, and although it was challenging at times, anyone can climb Mt. Fuji. I wouldn’t necessarily recommend doing it exactly how we did, but it was definitely an adventure. Here’s a very detailed account of my experience with Mt. Fuji and my tips for others who plan to climb it. 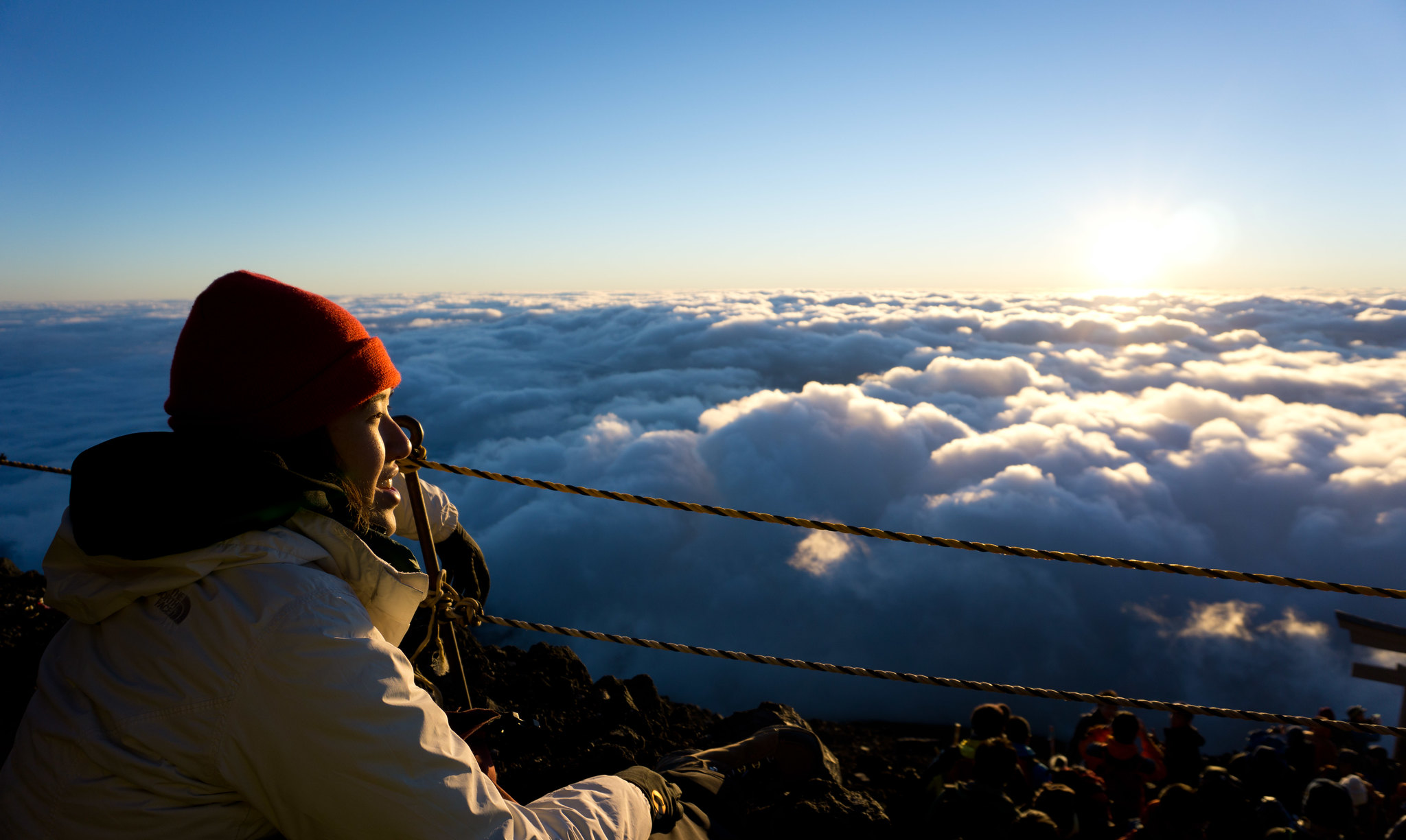 Preparation and what to bring

Mt. Fuji is a “walk up” mountain so it doesn’t require any special mountaineering equipment. Keep in mind that the Yoshida Trail doesn’t start at the bottom of the mountain but rather at 2305m. From here it is estimated to take only 6 hours up and 3 hours down, so you won’t need any backpacking or camping equipment either. You just need the following basic gear for a pleasant climb: 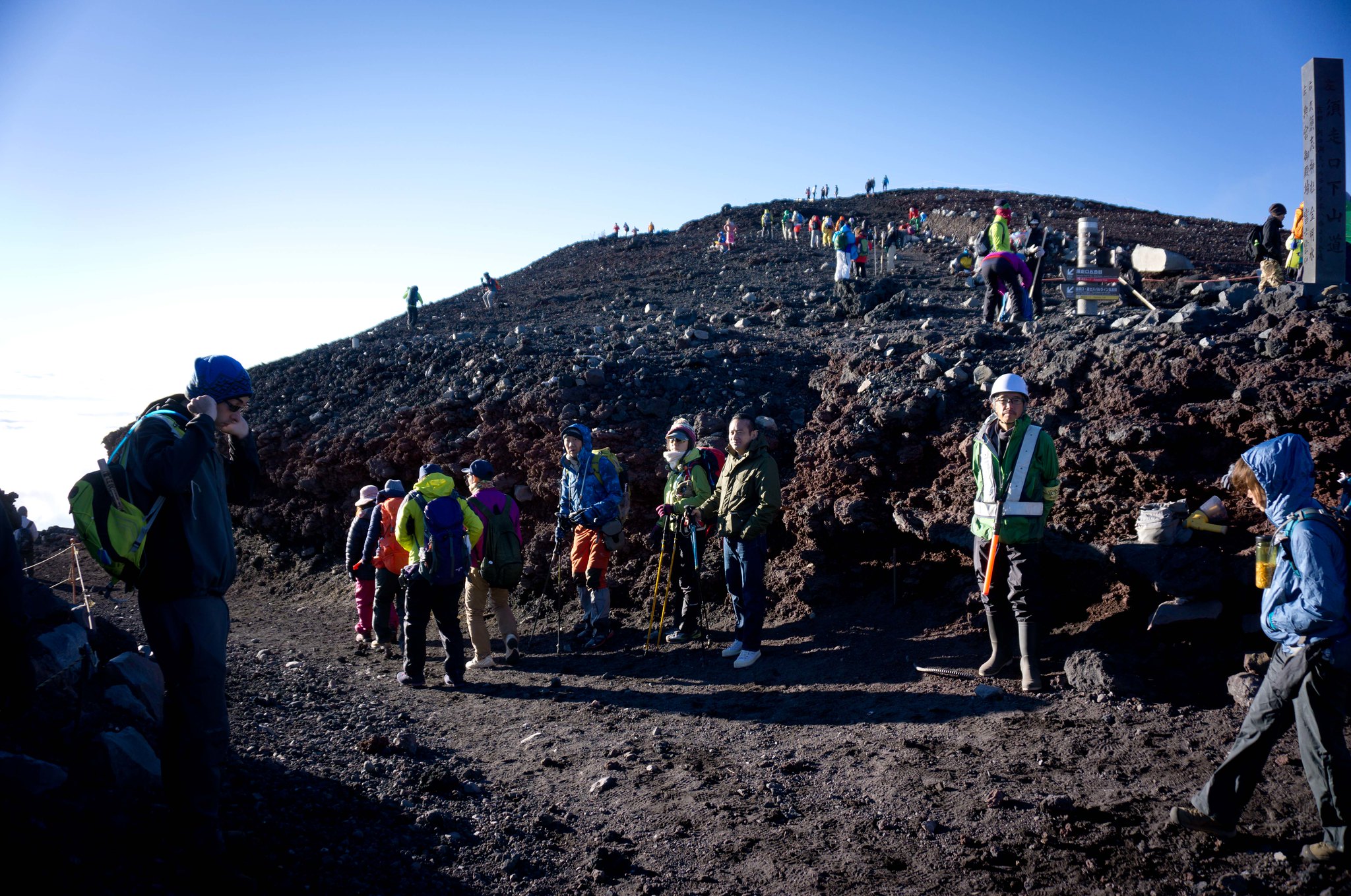 We visited at the very end of the hiking season, in early September. Check the dates for the climbing season as it affects when the buses run and whether the mountain huts and facilities are open.

Getting to Mt Fuji from Tokyo

The fastest, cheapest, and easiest way we found to get from Tokyo to the Mt. Fuji area was taking the Keio highway bus from Shinjuku Station to Kawaguchiko Station (the major bus station nearest Mt. Fuji). It takes 1 hr 45 min and costs ¥1750 one way. Check the bus schedule and reserve seats online here. Definitely reserve ahead of time — we didn’t and almost all the seats were sold out.

Another option is to take the train from Shinjuku to Kawaguchiko, which takes 1.5 hours and costs ¥4210. This also requires a transfer and only the first leg is a JR line, so it doesn’t help that much to have a JR pass.

From Kawaguchiko Station, you’ll need to buy a bus ticket and transfer to a local city bus to get to the trailhead at Fuji Subaru 5th Station. Check the bus schedule carefully, especially if you plan to start hiking in the evening. We got on the last bus at 7pm. It is an hour-long bus ride from Kawaguchiko to 5th Station, so if you miss the last bus that will be a hefty taxi fare. At 5th Station there are several buildings with shops and restaurants. There weren’t many people there when we got there at 8pm, but everything was still open and we were able to get some ramen and rice bowls for dinner.

One popular souvenir is a wooden walking stick you can purchase at the shops and get branded at each mountain hut on the way up. I really liked the idea but knew I would never bring a full size walking stick back on the flight home. Then we found some mini sticks which were about a foot long and perfect as a smaller souvenir so I got one of those for ¥500.

Note: There are ZERO garbage cans at 5th Station or anywhere else on the mountain. You’ll have to carry all your trash back out with you.

Another Note: Starting from 5th station onward, the toilets all cost ¥200 to use, with a collection box outside. The fees go back to funding the mountain facilities.

Switchbacks and climbing rocks through the night

After dinner and wandering around the shops a bit, we started our hike around 9:30 pm. In the dark it can be hard to see, but head straight into the area between the buildings and you’ll find large signs marking the entrance to Mt. Fuji and information about Yoshida Trail. There is a sign that warns against “Bullet Climbing”, which means to climb throughout the night without sufficient rest the day before. Which, incidentally, was exactly what we planned on doing.

This first section is a wide trail that goes downhill for about 1 km. This was counter-intuitive because we’re meant to be climbing a mountain, but eventually we reached a fork in the road with a sign that points up to Mt Fuji Summit. We took that right turn and finally start going uphill through trees. After a little while, we reached the first porta-potties and the 6th Station safety center where an official was handing out trail maps. From here to the top, it is 5.2 km/6 hours (according to the estimates on the trail sign) of switchbacks up a steep and rocky volcanic trail. In the dark. And it was already cold, only to get increasingly colder as the night got later and we climbed higher.

At least there are plenty of places to take a break along the way. The ascending trail has very frequent mountain huts and stations along the way to the summit. The longest stretch without any huts is between the 6th and 7th stations, which took us about 40 minutes. Many of the huts have bathrooms for a fee, benches to rest, and some sell simple food or snacks and canned oxygen. 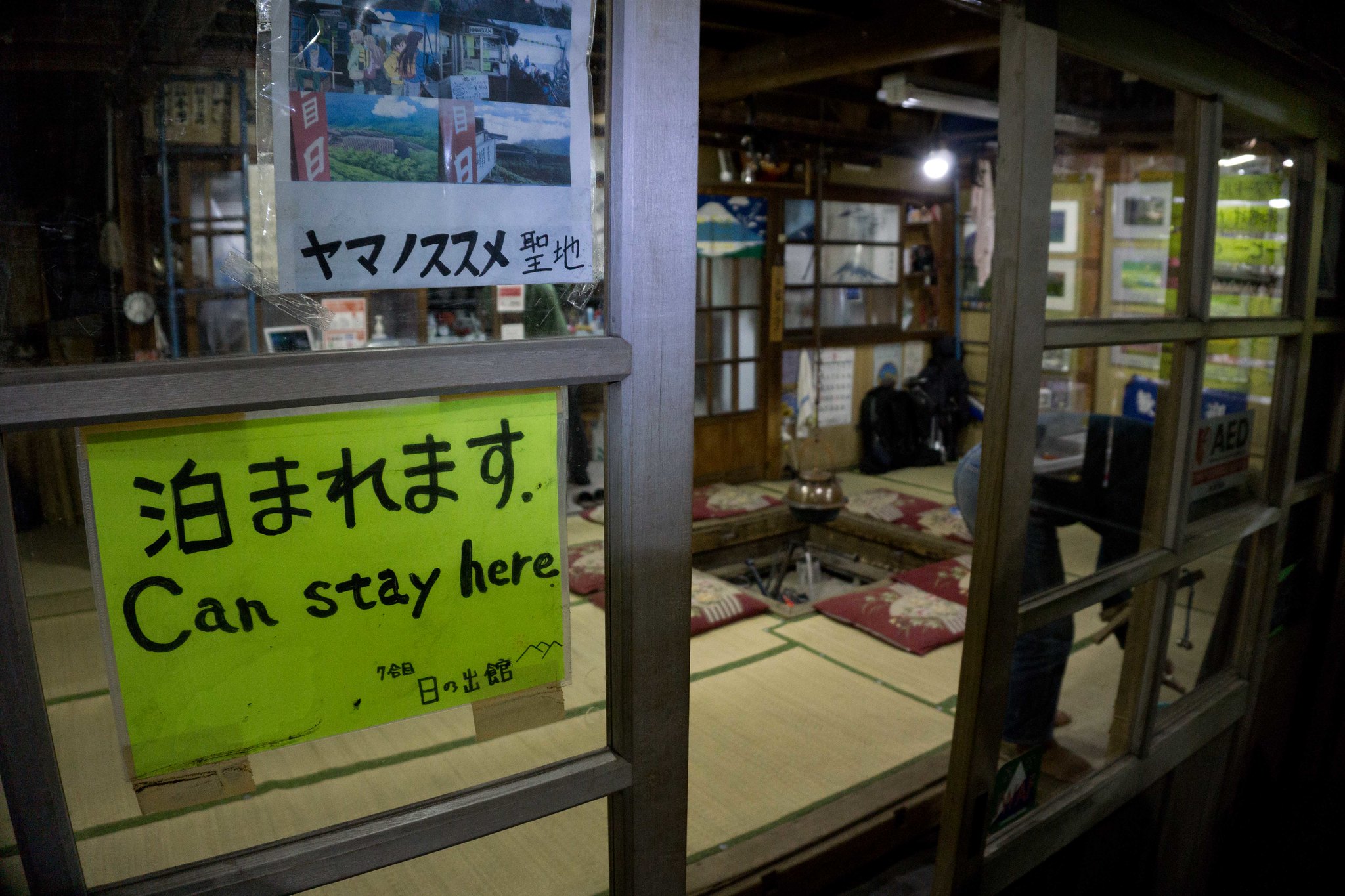 The huts also offer accommodation for hikers who want to sleep before continuing the hike for sunrise. From what I’ve read, this is extremely barebones accommodation, where you get to sleep on the floor and are shoulder to shoulder with strangers. And from what I’ve seen online, it can cost around 60 USD to stay the night. That being said, if I went back, I would probably rent some of that floor space to rest. I think spending those extra hours adjusting to the elevation would’ve helped with the altitude sickness I felt later on.

Most importantly, some of the huts offer stamps! These so-called “stamps” are actually brands that are burnt into those wooden souvenir walking sticks. Each hut has a unique design and charges ¥300 each. With the mini sticks we realized we were quickly running out of real estate for the stamps, so I would recommend picking only the ones you like. Keep in mind that you won’t be passing by these huts again on the descent. 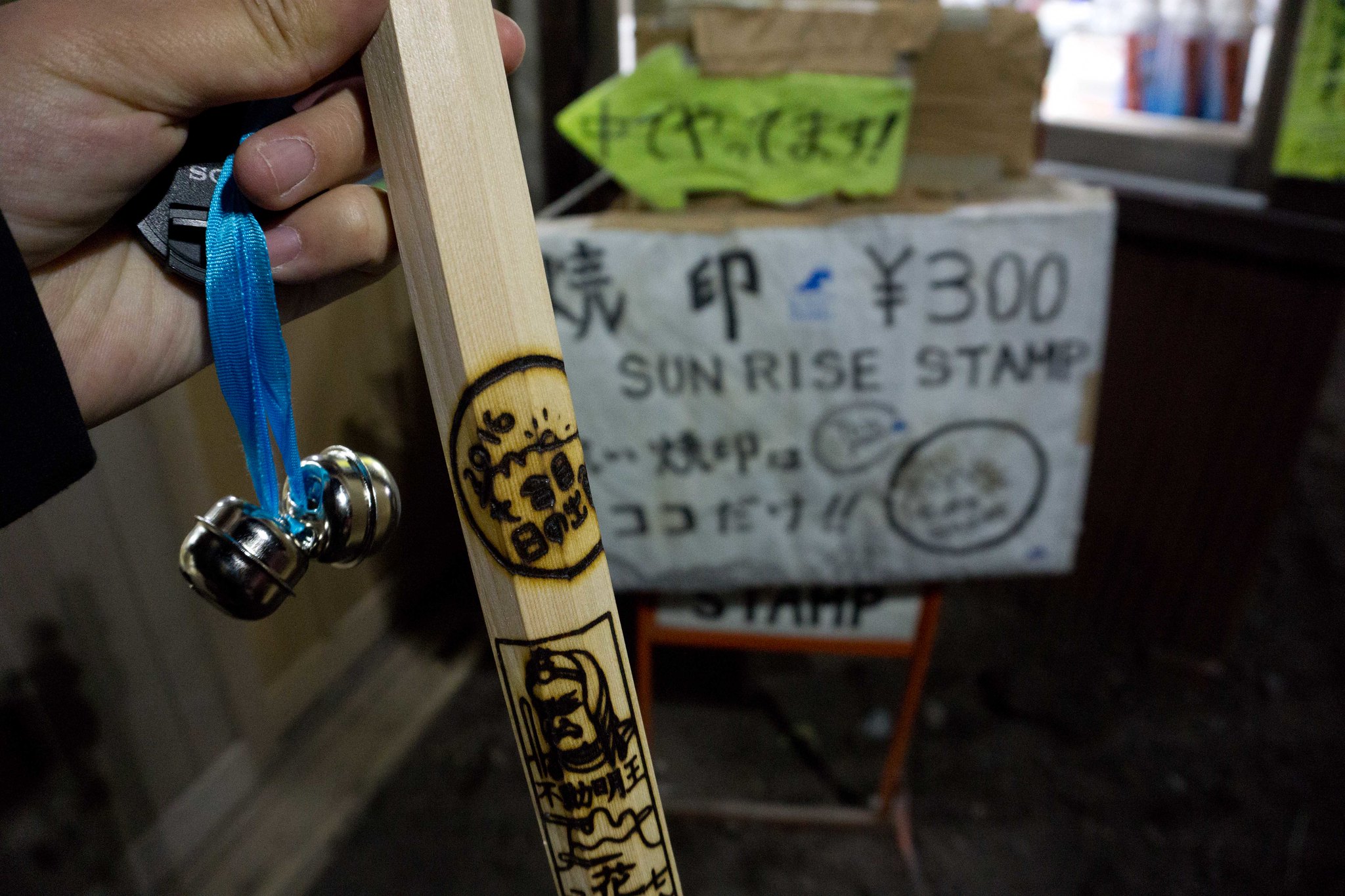 Our biggest mistake on the climb was to take a long break at 8th Station. We were ahead of our estimated 6-hour summit schedule and thought that if we reached the summit early, we’d have to endure the near-freezing temperatures we were already experiencing but with the wind and exposure that comes with being at the top of a mountain. (Turns out there is plenty of shelter up at the summit.) At this point it was around 2:30 am and there were plenty of other hikers also resting on the benches at the huts. We sat shivering and watched a tour guide attempt to wake up her group of hikers and get them out of the hut. That should’ve been a sign of what was to come…

At 3am we started heading up for what should’ve been the last 1.5 hours or so of climbing, had we kept our earlier pace. But now, it seemed that every hiker that was sleeping in a mountain hut had just woken up and started the last stretch of the climb at the same time. It was back to back hikers as far up as you could see, resulting in stop and go traffic and queues for most of the remaining climb. Also by this point the altitude was really getting to me and I could only walk a few steps before feeling like I needed to catch my breath. This last section from 8.5th station to the summit took an extra hour due to the sheer number of people going up.

Luckily, despite the massive traffic jam at the summit, we were almost at the top when the sky started getting brighter. As we reached the gate near the top, park officials were ushering people to keep moving. By now we were well above the cloud level and with the dim light we could see the thick fluffy layer of clouds surrounding us. It was an awesome sight to see the gradient of the sunrise come up above the clouds as we climbed the final stretch.

Once at the top I was beyond exhausted and thrilled to get to sit down for a while. I watched the stream of hikers continue to file up. It was now around 5:30am and there were hundreds of other hikers gathered at the summit which was a large area with more mountain huts and a crater. After a break for photos, a snack, and getting the last stamp on my stick, we decided to head back down earlier to try the beat the crowds. Little did I know what was in store for the descent…

One thing I didn’t realize was that the trail for the descent is completely separate from the ascent. It’s a bit longer and has far fewer huts and facilities on the way down. Instead of climbing larger rocks, it was a never-ending series of long and boring switchbacks full of small and loose volcanic rock. At the beginning I thought hey, this will be easy, but after the first few switchbacks and several near-slips and falls, I was OVER IT and exhausted and grumpy from lack of sleep.

This is where trekking poles would have come in especially useful. Also, sunglasses, because the rocks kicked up a whole lot of dust. The scree was so loose and slippery that at one point we saw a woman who had slipped and broken her foot. An official was with her explaining that there were no medical services that could pick her up, and she would have to walk back up to the nearest mountain hut to call for help. Be extremely cautious because medical help seems hard to come by!

It was fascinating to finally see the mountain during the daylight, and we could see all the way to the ascending trail where we were hours earlier. Even when the descending trail connected back to the original trail, I barely recognized it in the light.

It ended up taking me much longer than the estimated 3 hours to descend. On the other hand, my friend took well under 3 hours to get down so it really depends. It was a frustrating descent but I was so happy to be done.

What I would’ve done differently

Definitely take more time and spend at least a few hours resting in a mountain hut near 8th station instead of doing it in one straight shot (aka “bullet climbing”). My body needed the extra time to adjust to the altitude. I also would have brought trekking poles and sunglasses to make the descent a little less awful.

I would plan many extra hours of buffer when booking the transportation from and back to Tokyo. Factor in the crowds, waiting for a bus at 5th station, and the long ride back from 5th Station to Kawaguchiko Station when planning your trip. We didn’t even have time to find a view of Mt. Fuji from a distance, so my only views of the mountain are from on it!

A Bay Area native who tries to go outside once in a while.